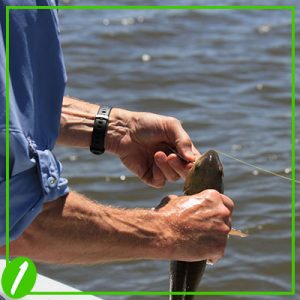 Now a day’s fish catching and releasing from rivers, and seas is becoming more and more popular. No matter when you catch fish you must unhook it as quickly as possible without or least injury. So to say how to unhook a fish is a great technique.

Normally a fisherman or an angler fishes in order to eat it or keep it in a pond or aquarium. Only a few of them release the fish in water as per law of the state or country. Of course it varies from country to country and regions.

In all cases we must try to unhook the fish quickly and safely. Some of the anglers release fish not for legally obliged but for purely sport fishing. Obviously when a fish is caught it receives at least some injury during catching process.

It is normally desired by all anglers that the fish are caught by lip-hooked but not gut-hooked ( when a fish fully swallow the hook) using the correct size of hook is the best way to ensure lip-hooking instead of gut-hooking .If you are constantly fishing small fish or gut-hooked fish you should change the type of hook—may be larger one which prevents small fishing as well as gut-hooking.

There are some patterns of hooks that can help in lip-hooking. Circular hook is the best in such cases—these are designed to slide fish’s mouth and lip-hooking. In this case anglers need not to strike with circular hook. Anglers target to fish of small mouth (flatfish) should use long shacked hook.

These allow to remove the very easily rather than short shacked pattern hook. It is needless to say that how to remove a fish hook quickly and safely needs huge practical knowledge of fishing.

How to unhook a fish properly?

Here we described some popular ways to remove a fish hook easily:

Truly speaking anglers who are in the opinion to release fish – first he should try to unhook the fish as quick as possible – otherwise he should go for crash the barb of hook and then release it. At last if these 2 process him fails he should go for cutting the line as close as near the hook.

Many anglers who are interested to lure fishing. Anglers may catch more fishes in stagnant water by lure fishing but to remove the hook in this case is much more difficult. It is always advisable to avoid treble hooks, plugs and spinners which can seriously damage a fish in lure fishing.

There are several types of disgorgers available in the market that can easily remove a hook. Even a fish is deeply hooked it is possible to safely remove the hook with using a disgorgers. Especially when you need to remove hook from a bigger fish’s mouth you need a long nose pliers bought from DIY store for safe unhooking without any injury.

Unhooking bigger fish like conger cell, tope, and smoth hound—can be difficult and must be careful to avoid injury. In such cases two anglers are needed at a time—one for opening fish’s mouth wearing protective gloves and other for getting hook out safely.

We can conclude by saying that circular hooks reduces the chances of fish being deeply hooked. Also we can say that long shacked hook is easier to remove.

Releasing fish in water with hook:

If however a fish is deeply hooked and is totally impossible to unhook then cut the hook as soon as possible. But keep in mind the line cutting should be as near as hook. There is a great debate whether a fish can survive or not with hook remaining inside the fish. There are two types material hook materials, namely one is stainless steel and the other is high carbon.

When a fish is caught for food or bait it should be killed quickly and humanely. In the name of “priest” a fishing tool is used by anglers to kill a fish. To hit at the back end of the fish head, instantly kill it. Smashing a fish with a stone or rock is not at all desired. In all cases you should always try to remove the from fish without any jerking or ripping. Ripping may cause heavy injury and bleeding which may lead to a infection.

Sometimes simple pliers can unhook a fish. Tools like long nose pliers, needle nose fishing pliers are used for removing hooks from fish. These are not so suitable for fish with big mouth, having sharp tooth—other device usually with long arm, a trigger, jaw spreading are very useful tools for unhooking a fish. Jaw spreader is a very useful tool for opening big fish mouth and removing hook thereby.

The release of fish in water completely depends on angler. He can make best assessment what to do at what situation. If it is found that it is totally impossible unhooking – then better leave it— let the fish go in water without any delay. But you must cut the line as close to hook.

Deeply swallowed hook is dangerous in the sense that the hook can puncture stomach, infected vital organs and cause serious disease. Based on circumstances anglers will take the decision—but always it is suggested to work 2 anglers at a time—incase of big fishing—one will open fish’s mouth other will remove the hook. So we can say that how to unhook a fish needs a lot of knowledge.

During fish catching anglers hand should remain wet throughout the catching process. Any tool or device that touches a fish should be wet to minimize loss of mucus which protects fish from infection. Also try to grab the fish so that there is no jerking and fragile filaments should be away. When the hook is attached to the lip it is very easy to de-hook as long as fish is not ploffing. Grab the the hook and guide it manually from the fish’s mouth. Gently back the hook out.

PickTheBest1.com is a participant in the Amazon Services LLC Associates Program, and we get a commission on purchases made through our links.